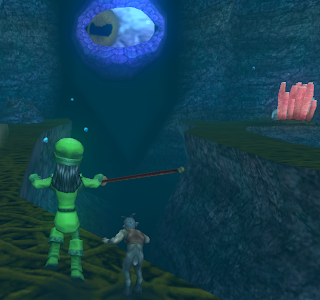 Yes, I know, there was a dragon eye in the Crown of Fire. But this is different! I actually knew there was a dragon titan up there. But this is random. This is mysteriously creepy. AND that eye looks so much more like a real eye. It creeps me out. And then it randomly shrinks and retreats into blackness. Then it's prone to pop randomly out again and startle me! Even worse - the ice monsters I'm fighting are in perpetual eye view. Ugh. Thanks for listening to my rant! As an extra special thank you - here's a code for the first lucky person to redeem it! p348f-3l7xl-3lu6j-ll538