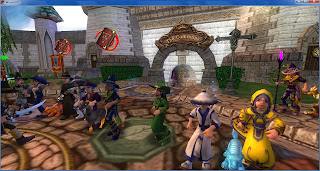 Okay, it's not the straightest dance line. But who cares? Oh, and --
I made an appearance!
Sadly, Emma did show up. I think she might have ruined the party for the half-minute she was there --
But it was just a half-minute! Seriously, Sophia, you are SO sensitive! All I did was pop in and say "Hey everyone, it's the splendiferous me!" Shouldn't my splendiferous self get a chance to meet people for a half-minute?
The biggest problem was that you pushed ME out! So anyway, I didn't come back to the party until about 5:30 EST, and by then it had split. So I just ported to a friend in a mini-party and played some Wildfire Tag (which I didn't win) and finally got a chance to see the Tower of the Winter Winds (which is an awesome house, btw.) *wants* So anyway, that's all for today! See you later! :)

- Sophia E
Posted by Sophia EmeraldBlossom at 10:49 AM