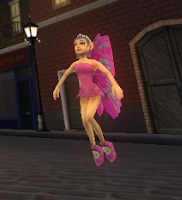 Once upon a time, there was a pink pixie. She lived in a dull gray city full of buildings that felt too big for her. Although lots of people came and went through that city, they were nothing like her. Many, in fact, were quite rude. The pixie felt different. She had trouble talking to people, and she often felt like she had no friends. There was nothing to do, and she usually was very sad. The dull gray city might have been nice for the big towering passersby, but for the pixie, it was miserable. Despite the streetlamps on every corner, it was dark there all the time. No matter where she went on those winding streets, she always ended up in the same places. Life was sad and boring. 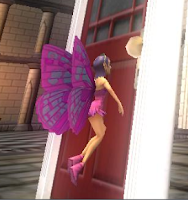 Then, one day, the pixie went exploring in places she had never dared to go. She'd had enough of her lonely, gray life, and she decided she didn't care what the rude big people thought of her anymore. With a defiant stare upon her face, she flew into the giant church, which had always seemed so vast from afar. Instead of the empty aisles she had expected, though, the pixie found a towering red door, right in the middle on a pedestal in an empty space. It was so large, she had trouble reaching the doorknob, but eventually she yanked it wide open. Beyond was a vast space of unknown, but at least it wasn't gray. With a deep breath, the pixie jumped straight in. 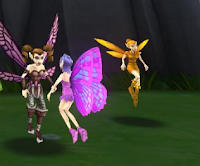 When eventually she came through another door, the pixie's mouth dropped open in surprise. She was in a sunny, colorful, magical world with lots of cool different creatures. With a delighted smile, she went exploring. Eventually, the pixie found herself in the middle of a shadowed patch of woods. Soon, she found a group of pixies, just like herself, and they were friendly! She knew that she had finally found somewhere where she could have fun and be able to talk to people without feeling so horribly different.

Soon, the pixie learned that the others made their living by constructing tents for visitors to see. They were beautiful and splendid, full of interesting things from all over. The pixie started up her own tent. Although it was small, less colorful, and more shoddily built than the others, she enjoyed running her tent for a long time.

Eventually, the pixie grew sad and resentful. People weren't coming to her tent. Everyone else's tents were so much better, so she suddenly just up and left. She ran far away from the pixie village full of tents, and found herself in a mushroom town. She moved into a house and lived a mundane, peaceful life. Although the constant pressure of the tents was gone, the pixie felt a yearning for the excitement and the joy of making her own tent, and being with others who shared the same feelings. The pixie's mixed emotions came and went fairly quickly, even as she entered and left her tent. She could never make up her mind. Now, she's running her tent, happy as ever, after taking another break she promised she wouldn't. She hopes to stay for a long time, but she worries people don't trust her word anymore.

There's the story of the Pixie and the Tents. Make of it what you will.