Hello again! I've got another membership, and I'm proud to announce that I'm now in CELESTIA! Yep, that's right. I might be a teensy bit underleveled, (lvl 48) but it's a fun challenge. Those crustaceans broke my perfect record of not dying in battle since tomb of the beguiler. And I've got a bone to pick with those Marleybonians. xD How come they can't just MIND THEIR OWN BUSINESS?! Seriously, our first taste
of them was way back in Wizard City, with Arthur Wethersfield. Then they were in Krokotopia, those pesky

archaeologists who just happened to awaken the tuts. Of course, we don't care about them in Marleybone. We then get a nice break from them in Mooshu and Dragonspyre, but then Celestia rolls around and...they're BACK! O_O Can't they just leave us alone? I'm plain sick of dogs by now, and I sure hope that they'll have a cat world at some point. On a more positive note, I love my swimming mount. 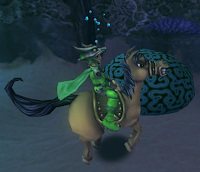 Oh yeah, and that brain coral thingy. xD Not to mention I got a satyr pet from my level 48 spell quest. I went straight to look it up on the W101 Central Wiki, and I saw...*cues drumroll*...Spritely in the talent pool! So I started training it like nuts, in strength and agility. When it became teen, it got Pip O'Plenty (1% pip chance). So I kept training it - and when it leveled to adult I saw SPRITELY! Yes! Problem with spritely though - it uses up your guiding lights, sometimes on a sprite that you don't even need. So I'm not using guiding light as often. Other than that it's great! And it takes the pressure off, so I can heal others in the group instead of myself. Those spritely pets sure do go crazy sometimes. But on a different note, it's time for...

Outfit of the Week! 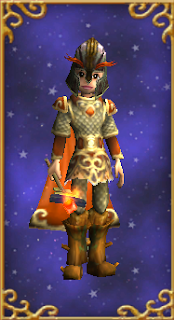 This outfit is pretty cool. It looks Dragonspyre-ish. If I remember correctly, the wearer of this outfit was a Balance wizard. Makes sense, since it's orange. I call this the orange knight outfit. However, the boots don't match. (Hey, not all my unique outfits will have parts that don't match! It's coincidence.) I'm not sure, but I think those boots are from the Wyvern's Hoard. I especially like the robe. I don't have much to say right now except for one important-ish announcement that has nothing to do with this outfit!

Exclusive content in the "My Writings" section! This content is about Donna DragonFlame, so if you've read the first part of the story scroll down to the bottom of the page and read it!