Sorry, people. I got SO wrapped up in playing, I deserted my blog. But I'm back now! Oh yeah, and I'm level 46 now, in Dragonspyre and about to do the Labyrinth for the second time. >.< Honestly, the Labyrinth must be the least fun dungeon in the history of the spiral. Meanwhile, since I'm in a ranting-about-dungeons mood, I put together a list of top three most fun dungeons ever...and then a list of top three least fun.

Top Three Most Fun Dungeons Ever - Spoiler Warning!
1. Hall of Time - I just think it's cool how at the beginning of the Grand Chasm, they say that somebody was repairing the bridges to the vault but they don't know why. And then you go back in time repairing all the bridges.
2. Frostholm - This dungeon...is epic. xD Basically, all you have to do is sneak into the enemy Red Claw camp and make mischief. It's just really funny to play through.
3. Throne Room of Fire - Five words: I. JUST. LOVE. THE. MAP! That's the only reason why this is on the list. Seriously, I could go in there and stare at the 3D, perfect map of Krokotopia for half an hour; but of course I'm not going to.

Top Three Least Fun Dungeons Ever - More Spoilers!
1. The Labyrinth - I hate this dungeon. It's so tedious, and you have to do it like three times. First for the main quest, then for the obsidian chest, and then for the level 48 school quests! Actually, I'm not sure if every school has to do it, but a lot of them do. And I strongly dislike wandering street bosses.
2. Katzenstein's Lab - The smokestacks. >.< I could rant about the smokestacks all day, but I think there are other things you'd rather hear me rant about. Or maybe not....
3. Sunken City - It's really hard when you get the quest for it, and the sidewalks don't work very well. However, when I went back to replay it for the level 38 life quest, it wasn't so bad.
Note: I have not done Kensington Park, but I've heard bad things about it. If I had done it, it would probably be on this list.


Outfit of the Week! 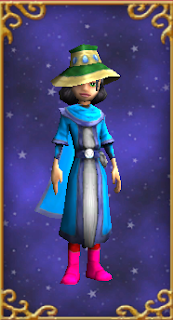 I was having trouble finding a wacky outfit, so I had a friend do it for me. As always, I won't do names in outfit of the week, but this one is pretty simple. It would go really nice together - except for the colors. The colors are what make it wacky! I will call it the chaotic color scheme outfit. There's not much more to say...so I have some important updates! Read on to learn more.


Fanfiction update!
Name change: the name of my fanfiction has been changed from The Bronze Key to The Secret Gate. I think the first part will be out next week - but no promises! If it's out next week, the week after that I will add a little surprise; maybe some exclusive content about one of the characters. And I will be submitting it to the official Wizard101 website as well!

Interview update!
There's an interview on the interviews page - with my best ever friend and questing companion, Elizabeth GoldenThistle! Head on over to check it out.

So...this probably sets the record for the longest post ever on my blog. And there's only three days left of my membership. :( But anyway, see you in the spiral! And there will be a code next week!

Posted by Sophia EmeraldBlossom at 8:20 PM