Can you guess what all that insane cheering was about? 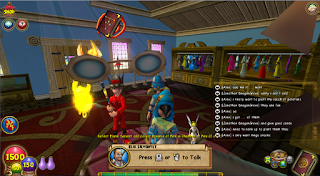 Er, no, not those random floating glasses Emma found in the bazaar.

And it's not the purple seraph, either. 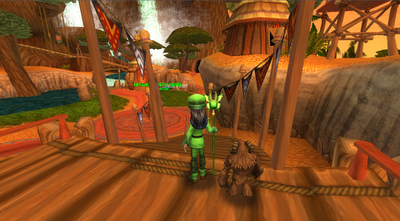 I finished Celestia, finally! No more Water-Matons! No more darn crustaceans! No more Marleybonians! *hears thumping noise* Oh no! I think I know what that is! You might not know this, but I have to lock Emma in the closet while I post ever since I let her. I think she's escaped! *gets dragged away by Emma*
Hello, everyone! Sophia is always acting so mean to me ever since I signed off that last post. I want this blog. *pouts* Seriously, I'll rename this thing The Crafty Thaumaturge. No, not the tricky, mean, scheming kind of crafty. I mean the making things kind. Although, maybe I am tricky, mean, and scheming sometimes... Like picking the lock in the closet with a little pin I fashioned out of some spare scrap iron? That was brilliant! Now wait a minute, Sophia's coming back. *drags Sophia into closet and locks* Ha! A taste of your own medicine! Not to mention Sophia never carries around reagents. She always gives them to me. >:) I must admit, sometimes we're jealous of each other. I'm envious because Sophia's always off doing heroic adventures in Celestia, now Zafaria. And I think Sophia's jealous of me because I'll have better gear than her at some point, and I can open up a hotel and charge treasures. *gasps* I've gotta go check on my ring! The molten bronze is boiling over!
Phew. She's gone. We'll, I need to sign off this post before she comes back. See ya later!


- Sophia E
Posted by Sophia EmeraldBlossom at 10:41 AM