I found my twin! First wizard I've found named Sophia EmeraldBlossom! Except me. Click to enlarge. It's 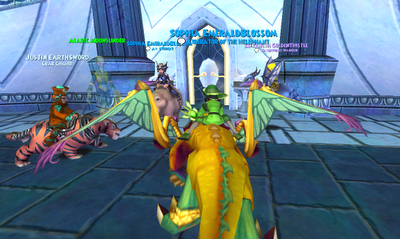 another Sophia EmeraldBlossom! This picture was taken before she added me. So anyway, Elizabeth and I were running the Waterworks. We were about two rounds away from the end when my friend Justin EarthSword (far left) whisper chatted me and said "port now". I wanted to know why. He said, "i found another sophia emeraldblossom". So after the run was over (no gear by the way) I ported and Justin was in an mob fight. After the fight, I ran over to the side and found her on a hippogriff. She was a level 56 ice wizard, and needed help with a boss. So she added Elizabeth and I and we went over to fight him. After it was over I invited Sophia over to see my awesome museum project, er, that is, TOP SECRET HOUSE PROJECT, and she said I was really good at decorating. That's just about it!